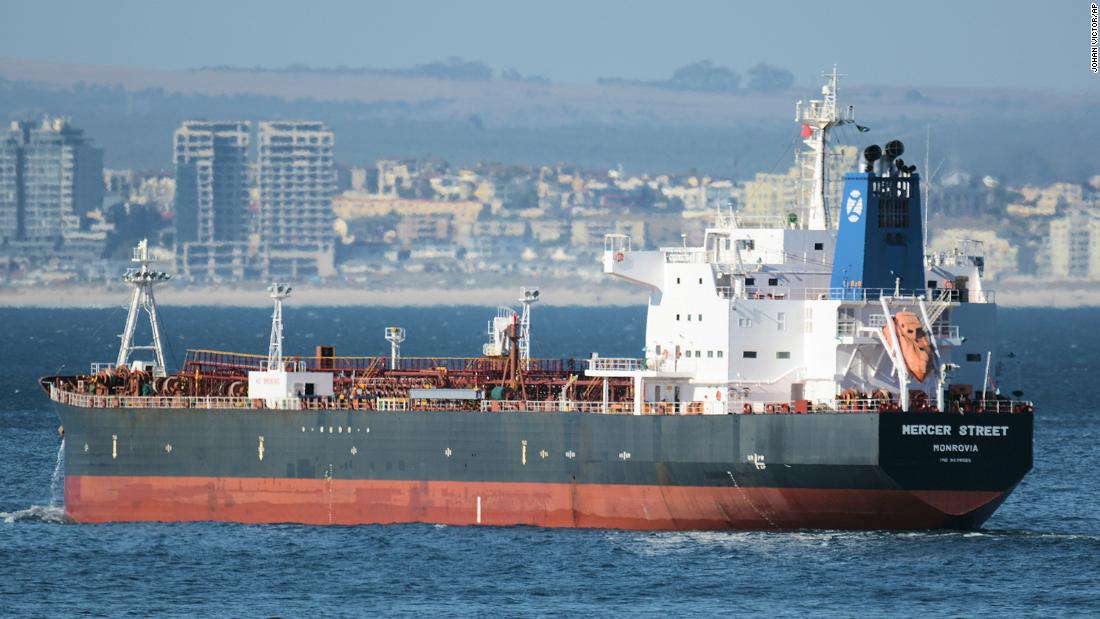 The assault on Mercer Street, which killed two crew members, raised tensions in the region and sparked a united outcry from the coalition of G7 nations, including foreign ministers bluntly blamed Iran and condemned the attack as “a flagrant violation of international law.”

“All the available evidence clearly points to Iran. There is no justification for this attack,” the G7 joint statement issued on Friday said.

The Pentagon investigation team, which dispatched the USS Ronald Reagan aircraft carrier ship, discovered that the tanker was targeted on July 30 by an unmanned aerial vehicle (UAV) “loaded with a quality explosive. military “, according to the central command. declaration. He had been targeted the day before “by two unsuccessful explosive drone attacks”.

The July 30 attack, which caused “significant damage” to the ship, “required a calculated and deliberate retargeting of M / T MERCER STREET by Iran,” according to central command.

“The use of Iran-designed and produced ‘kamikaze’ one-way attack UAVs is a growing trend in the region,” said a summary included in an accompanying report from US Central Command. “They are actively used by Iran and its proxies against coalition forces in the region, to include targets in Saudi Arabia and Iraq.”

The US team shared evidence with British and Israeli explosives experts, the statement said, and “both partners agreed with the US conclusions.”

Mercer Street, which was off the coast of Oman at the time of the attack, is operated by a company chaired by an Israeli businessman. The rhetoric between Israel and Iran has grown increasingly belligerent in the wake of the deadly incident and as new radical Iranian president Ebrahim Raisi takes office.

Israeli Defense Minister Benny Gantz said “yes” on Thursday when asked if Israel was ready to attack Iran. A spokesman for the Iranian Foreign Ministry said the military action would elicit a “decisive” response. This message was echoed on Friday by Iran’s deputy ambassador to the United Nations, who warned “against such adventurisms and miscalculations” and blamed Israel for the attack on the tanker.

US Secretary of Defense Lloyd Austin spoke with Gantz on Friday. The two “expressed concern about the proliferation and use by Iran of one-way attack drones in the region and pledged to continue to cooperate closely on regional security matters,” the spokesperson said. Pentagon said John Kirby in a statement.

“They agreed to work together alongside their allies and partners to condemn Iran’s aggression which undermines freedom of navigation, and they exchanged views on the next steps,” he said. he declares.

Secretary of State Antony Blinken has repeatedly promised a “coordinated response” to the attack, although the State Department declined to go into details on what such a response might entail.

A threat to peace

Blinken and his G7 counterparts – the other foreign ministers of Canada, France, Germany, Italy, Japan, the United Kingdom and the High Representative of the European Union – called for the ‘Iran “to end all activities inconsistent with relevant UN Security Council resolutions, and call on all parties to play a constructive role in promoting regional stability and peace.”

“Iran’s behavior, alongside its support for proxy forces and armed non-state actors, threatens international peace and security,” the joint statement said on Friday.

“Ships must be allowed to navigate freely in accordance with international law,” the statement said. “We will continue to do all we can to protect all maritime transport, on which the global economy depends, so that it can operate freely and without being threatened by irresponsible and violent acts.”

Two crew members, a British and a Romanian, died in the attack on the tanker Mercer Street on July 30.

According to the Central Command report, “the crew followed proper procedures, gathered in a safe haven inside the ship, and informed their company of an attack.”

The explosion that followed the UAV’s impact on the tanker created “a hole about 6 feet in diameter in the upper part of the wheelhouse and badly damaged” inside the tanker, the statement said.

“The explosive chemical tests indicated a nitrate-based explosive and identified as RDX, indicating that the UAV had been rigged to cause injury and destruction,” he said.

The explosives expert team was able to recover pieces of the drone used in the third successful attack, including part of the “wing and internal components that were almost identical to the previously collected examples of Iranian UAVs in one sense. unique, “said the central command.

“The distance between the Iranian coast and the scene of the attacks was within the range of documented Iranian one-way attack drones,” the statement said.

After the US investigative team analyzed the consequences at the scene, material was transferred to US Navy Fifth Fleet Headquarters in Manama, Bahrain, and then “to a US national laboratory for testing and testing. additional verification, “the statement said.